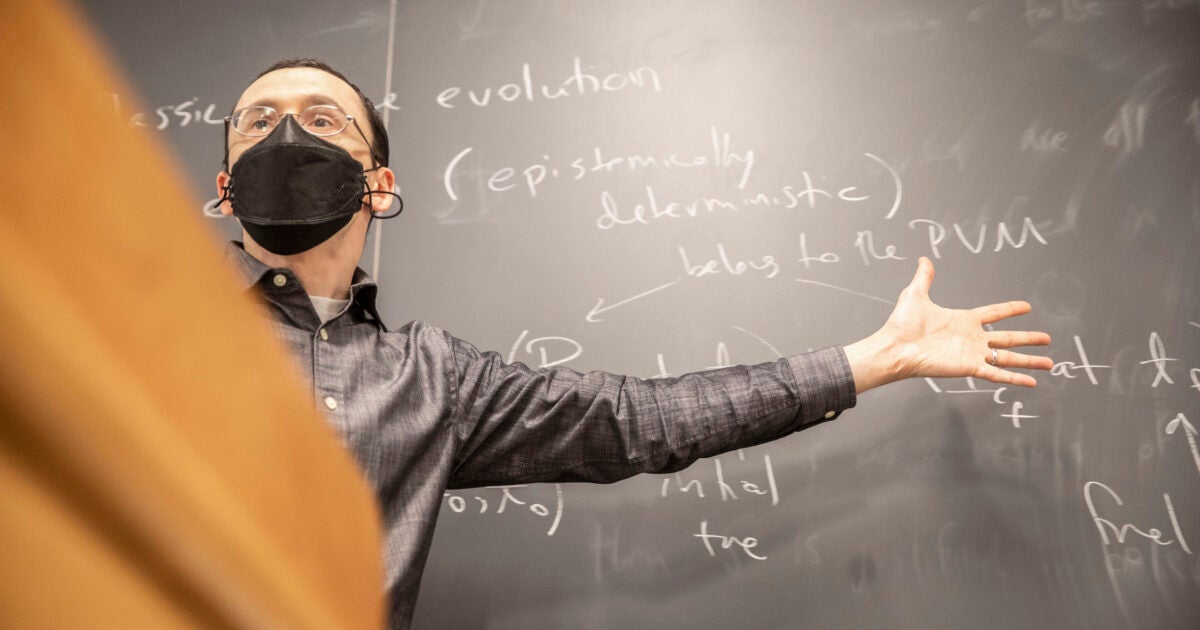 Walk into Jacob Barandes’ new class and the topic of discussion might be a philosophical exploration of whether a cat could be simultaneously alive and dead. A visit on a different day may find the lecturer filling the blackboard with a mathematical equation that stretches 20 feet before continuing on a new line, over and over. Or students might be dissecting an example of classical physics such as Newton’s laws of motion.

So, exactly what kind of class is this?

The subject sits within a much larger field called the philosophy of science, a branch of study that examines the theoretical foundations, methods, and implications of science in the real world. In this case, Barandes is applying the class’ inquiry to quantum theory.

“This is physics by scrutinizing,” said Barandes, who is also co-director of graduate studies for the Department of Physics. “This is taking our best scientific theories, dissecting them, disassembling them, looking at the pieces piece by piece, trying to understand them and how they fit together, and the larger wholes that they form.”

Quantum theory, which explains the nature and behavior of matter and energy on the atomic and subatomic levels, is often described as the best-tested and most predictive scientific theory out there, one that makes possible precision technology such as atomic clocks and particle accelerators. Much of our modern technology — including smartphones, lasers, LEDs, and MRI machines — relies on it.

But when it comes to painting a picture of the real world, quantum theory can feel unwieldy and counterintuitive. Take, for instance, the notion of particles being in more than one place at a time.

The class aims to explore why quantum theory contains so many strange and exotic mathematical structures and seemingly illogical possibilities and to get a sense of the different ways the world would appear depending on how aspects of the theory are interpreted.

“This is taking our best scientific theories, dissecting them, disassembling them, looking at the pieces piece by piece, trying to understand them and how they fit together, and the larger wholes that they form.”
— Jacob Barandes

It delves into the century-long effort to resolve these mysteries and hits on ideas from quantum theory like entanglement, superposition, and, of course, parallel universes and Schrödinger’s cat (both alive and dead in a box).

“[One of the goals is] to reformulate the classical picture as closely as we can to quantum theory so that we can pinpoint as precisely as possible what it is that we’re changing when we go from classical to the quantum case,” Barandes said.

What sets the class apart from many quantum physics courses is that this one is less about calculating numerical predictions and more about learning foundationally and logically how the theory works and what it tells us about the world around us. Through it all, students are encouraged to ask the ultimate philosophical question: Why?

At one recent class, for example, as Barandes was working through a quantum equation, a student’s hand shot up and Barandes was asked why he chose one specific example over another to illustrate the point of the lesson. The class then went into an extended debate over the logic behind that decision.

“Why have we decided to model the system in this way? Why are these the operations we have chosen? What if we did it differently?” Singh said. “Those are usually questions that are not the point of a technical class, but in this class the [instructor] was really happy to entertain those questions because that is the point. The point is to understand why we are making the decisions that we are.”

Students say this level of understanding, especially when it comes to a theory as counterintuitive as quantum can be, is one of the main reasons they took the course.