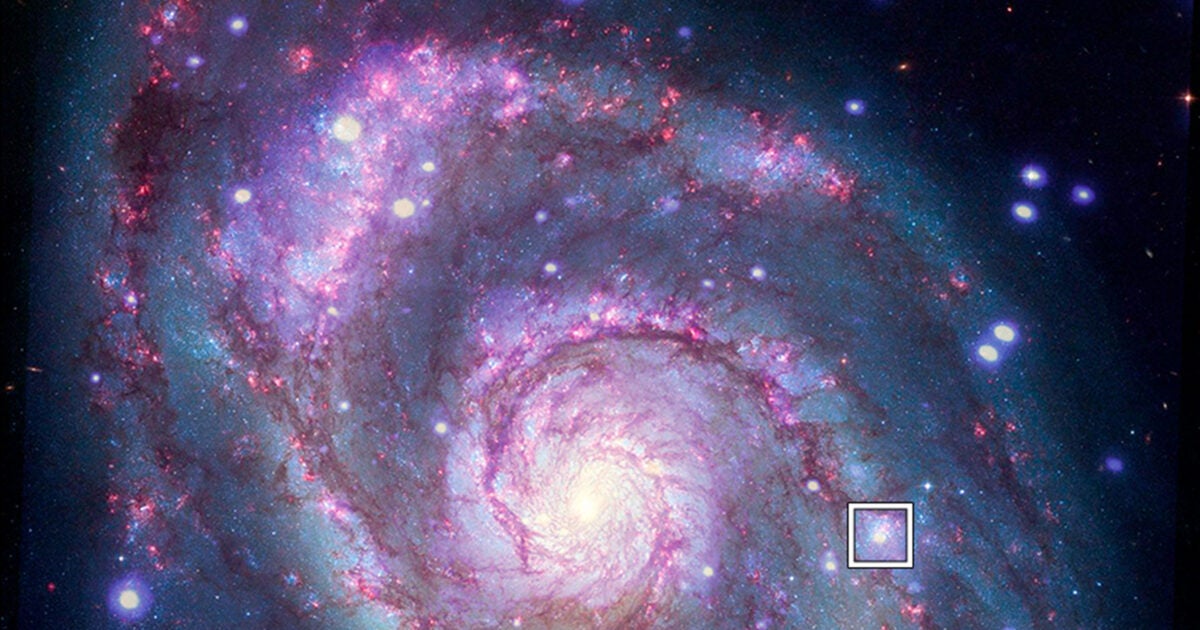 Signs of a planet transiting a star outside of the Milky Way galaxy may have been detected for the first time. This intriguing result, using NASA’s Chandra X-ray Observatory, opens up a new window to search for exoplanets at greater distances than ever before. The possible exoplanet candidate is located in the spiral galaxy Messier 51 (M51), also called the Whirlpool galaxy because of its distinctive profile.

Exoplanets are defined as planets outside of our Solar System. Until now, astronomers have found all other known exoplanets and exoplanet candidates in the Milky Way galaxy, almost all of them less than about 3,000 light-years from Earth. An exoplanet in M51 would be about 28 million light-years away, meaning it would be thousands of times farther away than those in the Milky Way.

“We are trying to open up a whole new arena for finding other worlds by searching for planet candidates at X-ray wavelengths, a strategy that makes it possible to discover them in other galaxies,” said Rosanne Di Stefano of the Center for Astrophysics | Harvard & Smithsonian (CfA), who led the study, which was published Monday in Nature Astronomy.

This new result is based on transits, events in which the passage of a planet in front of a star blocks some of the star’s light and produces a characteristic dip. Astronomers using both ground-based and space-based telescopes — like those on NASA’s Kepler and TESS missions — have searched for dips in optical light, electromagnetic radiation humans can see, enabling the discovery of thousands of planets.

Because the region producing bright X-rays is small, a planet passing in front of it could block most or all of the X-rays, making the transit easier to spot because the X-rays can completely disappear. This could allow exoplanets to be detected at much greater distances than current optical light transit studies, which must be able to detect tiny decreases in light because the planet only blocks a tiny fraction of the star.

The team used this method to detect the exoplanet candidate in a binary system called M51-ULS-1, located in M51. This binary system contains a black hole or neutron star orbiting a companion star with a mass about 20 times that of the sun. The X-ray transit they found using Chandra data lasted about three hours, during which the X-ray emission decreased to zero. Based on this and other information, the researchers estimate the exoplanet candidate in M51-ULS-1 would be roughly the size of Saturn, and orbit the neutron star or black hole at about twice Saturn’s distance from the sun.

While this is a tantalizing study, more data would be needed to verify the interpretation as an extragalactic exoplanet. One challenge is that the planet candidate’s large orbit means it would not cross in front of its binary partner again for about 70 years, thwarting any attempts for a confirming observation for decades.

“Unfortunately, to confirm that we’re seeing a planet we would likely have to wait decades to see another transit,” said co-author Nia Imara of the University of California at Santa Cruz. “And because of the uncertainties about how long it takes to orbit, we wouldn’t know exactly when to look.”

Can the dimming have been caused by a cloud of gas and dust passing in front of the X-ray source? The researchers consider this to be an unlikely explanation, as the characteristics of the event observed in M51-ULS-1 are not consistent with the passage of such a cloud. The model of a planet candidate is, however, consistent with the data.