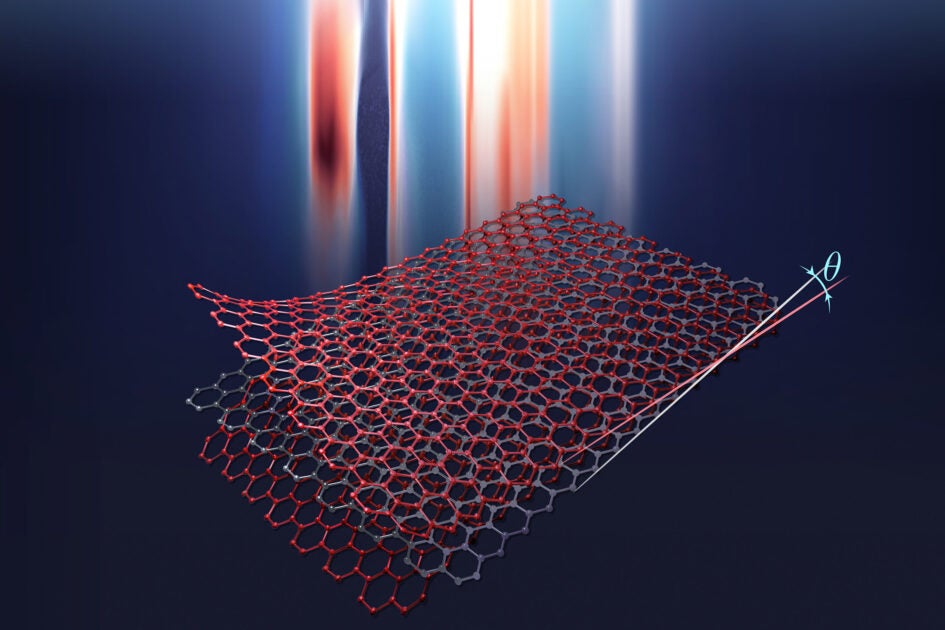 In 2018, the physics world was set ablaze with the discovery that when an ultrathin layer of carbon, called graphene, is stacked and twisted to a “magic angle,” that new double-layered structure converts into a superconductor, allowing electricity to flow without resistance or energy waste.

Now, in a literal twist, Harvard scientists have expanded on that by adding a third layer and rotating it, opening the door for continued advancements in graphene-based superconductivity.

The work is described in a new paper in Science, and eventually could lead toward superconductors that operate at higher temperatures — even close to room temperature. These superconductors are considered the Holy Grail of condensed-matter physics, as they would open the door to tremendous technological revolutions in many areas, including electricity transmission, transportation, and quantum computing. Most superconductors today, including the double-layered graphene system, work only at ultracold temperatures.

“Superconductivity in twisted graphene provides physicists with an experimentally controllable and theoretically accessible model system where they can play with the system’s properties to decode the secrets of high-temperature superconductivity,” said one of the paper’s co-lead authors, Andrew Zimmerman, a postdoctoral researcher working in the lab of Harvard physicist Philip Kim.

Graphene is a one-atom-thick layer of carbon that is 200 times stronger than steel, yet extremely flexible and lighter than paper. It has almost always been known to be a good conductor of heat and electrical current, but it is notoriously difficult to handle. Experiments unlocking the puzzle of twisted bilayer graphene have been ongoing since MIT physicist Pablo Jarillo-Herrero and his group pioneered “twistronics” in 2018, when they produced the graphene superconductor by twisting it to the magic angle of 1.1 degrees.

The Harvard scientists report successfully stacking three sheets of graphene and then twisting each of them to that angle to produce a three-layered structure that not only is capable of superconductivity, but does so more robustly and at higher temperatures than many of the double-stacked graphene systems. The new and improved system is also sensitive to an externally applied electric field that allows researchers to tune the level of superconductivity by adjusting the strength of that field.

“It enabled us to observe the superconductor in a new dimension and provided us with important clues about the mechanism that’s driving the superconductivity,” said the study’s other lead author, Zeyu Hao, a Ph.D. student in the Graduate School of Arts and Sciences also working in the Kim Group.

One of those mechanisms has the theorists really excited. The trilayer system showed evidence that its superconductivity is due to strong interactions between electrons, as opposed to weak ones. If this is verified, it could help open a path not only to high-temperature superconductivity, but to possible applications in quantum computing.

The researchers plan to continue exploring the nature of this unusual superconductivity in further studies.

“The more we understand, the better chance we have to increase the superconducting transition temperatures,” said Kim.

This work was supported by the National Science Foundation, the Department of Defense, and the Simons Collaboration on Ultra-Quantum Matter.