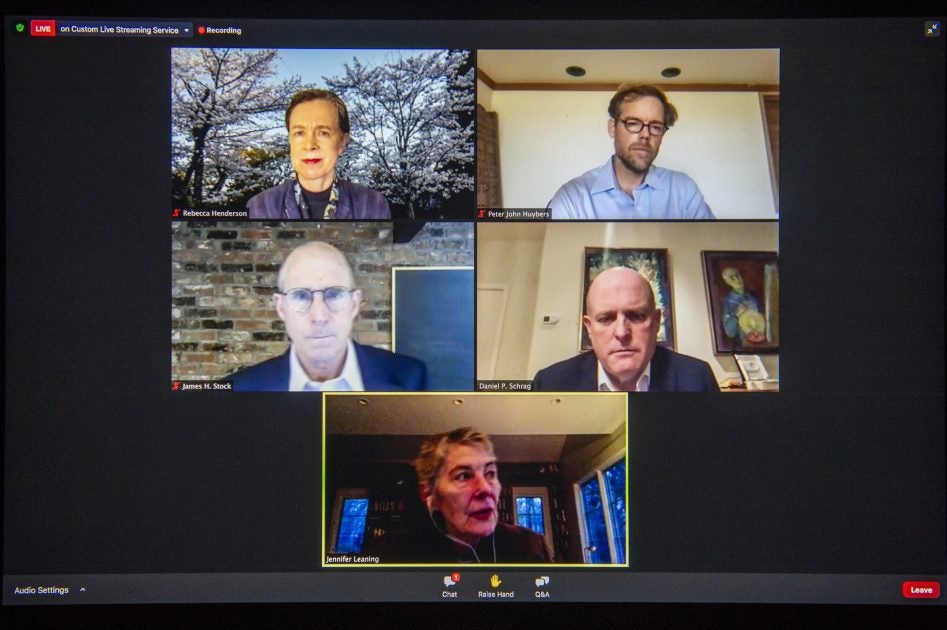 If the causes and problems of climate change are entwined, then the solutions must be as well. That was the consensus as Harvard faculty from a range of fields came together for “Confronting Climate Change: Diverse Perspectives on the Path Forward,” an online discussion co-sponsored by the Office of the Vice Provost for Advancement in Learning and the Harvard University Center for the Environment.

Moderator Daniel Schrag, Sturgis Hooper Professor of Geology and professor of environmental science and engineering, opened Thursday evening’s session by asking about the interconnections between climate change and the pandemic, arguably the two most urgent global crises of the time.

“We know it’s going to get warmer,” said Peter Huybers, professor of Earth and planetary sciences and of environmental science and engineering. Citing “the underlying pressure due to climate change, droughts, seasonal floods,” he noted that “since 2015, the number of people who are undernourished has been increasing, and that has accelerated under COVID 19.”

Speaking about her experience in Africa, Jennifer Leaning, Harvard Medical School associate professor of emergency medicine, talked about how the pandemic has interrupted international cooperation at a critical time.  “In Chad, in the semi-Sahel, which is verging with the Sahara, sources of water are disappearing,” said Leaning, an emergency room doctor by training. “They have always had a precarious income stream from trade, and trade has really dropped. The options for livelihood have diminished.”

The tipping point, they all agreed, has arrived. This past year, Schrag, who also serves as director of the Harvard University Center for the Environment, said, “We saw fires and the melting of sea ice.” Leaning spoke about “distress migration,” movement of individuals and communities forced by climate change. “If people get really hungry, they’re going to move,” she said. “They’re going to be heading north.”

This crisis, however, may also be an opportunity. “For a long time, we couldn’t imagine something other than business as usual,” said Huybers. “This is an incredibly opportune time to engage around major international issues. We ought to try to capitalize on it.” Citing the principle of enlightened self-interest, he noted, “We have to contend with the welfare of others on this planet if we want to ensure our own welfare.”

So how much change can Biden bring on climate change? 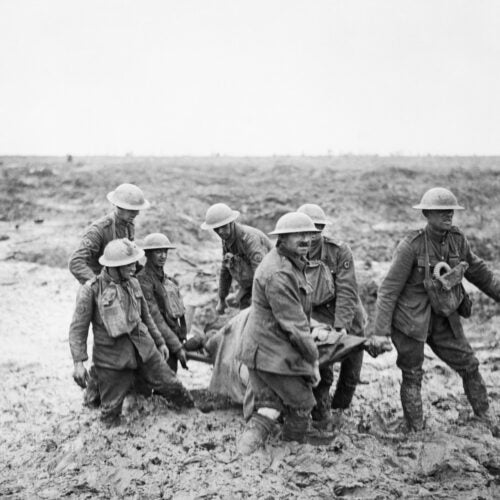 When it hits 100 degrees in Siberia …

Leadership and sustainability scholar Rebecca Henderson, the John and Natty McArthur University Professor at Harvard Business School, reported hopeful signs from the business community. “We’re seeing firms really beginning to change,” she said. However, industry continues to look for policy to lead the way. “One of the two major political parties in the U.S. still has not accepted the reality of climate change.” With the Democrats’ slim majority in the House at risk, she said, “If you’re a business, you don’t want to alienate the political party that might be regulating you soon.”

To make progress, the panel agreed, developed countries need to take the lead. James H. Stock, Harold Hitchings Burbank Professor of Political Economy and a member of the Harvard Kennedy School faculty, urged a three-pronged approach. “Get the power sector on board for a deep de-carbonization,” urged Stock, suggesting a series of policy initiatives, such as carbon taxes. He also proposed a push to build more charging stations and other infrastructure to help speed the transition to electric vehicles. Finally, he cited the need to develop more green technologies to deal with tougher challenges. “We don’t know what to do about steel, about cement,” he said. The production of these ubiquitous building products is a major source of greenhouse gas emissions.

Leaning also brought up the economic realities of addressing climate change on a global scale, stressing that less-developed countries need viable options. “You need some kind of fuel or stove that can be more green,” she said. “For the jitney bus, that is the way to get to market to be electric.”

“What the developed countries need to do is make it easy and cheap for the rest of the world to be green,” agreed Stock. Business, said Henderson, would follow. “We need to build a stronger collective sense that it is in our interests. Building the political will is as important as the policy.”

Ultimately, the panelists agreed, there are reasons to hope. Leaning referred to Mediterranean and European movements to create a “rescue service” for the many economic migrants who risk their lives at sea. “We’re seeing a collective action around the Mediterranean that is essentially a humane one as well as a legal one,” she said.

Henderson sees a larger role for industry: “Having the great corporations talk about climate change is a help,” she said. “People trust their own company. To have your firm say, ‘We have to change the lightbulbs; we need to change the supply chain’ will help.”

Stock, who worked in the Obama administration, applauded the goals of the new Biden administration but found more optimism in “the youth movement.” He called actions by Greta Thunberg and the Sunrise Movement “transformative.”