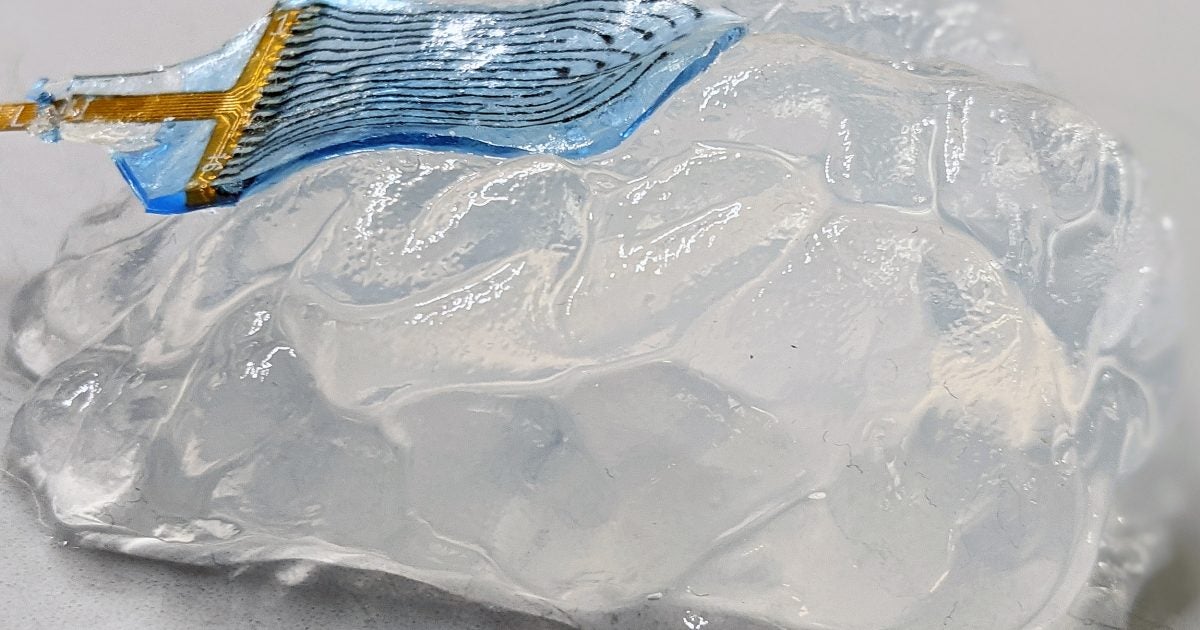 Arrays of metal electrodes are often used in medical procedures that require monitoring or delivering electrical impulses in the body, such as brain surgery and epilepsy mapping. However, the metal and plastic materials that comprise them are stiff and inflexible while the body’s tissues are soft and malleable. This mismatch limits the places in which electrode arrays can be successfully used, and also requires the application of a large amount of electrical current in order to “jump” the gap between an electrode and its target.

Inspired by the unique physical properties of living human tissues, a team of scientists from Harvard’s Wyss Institute and John A. Paulson School of Engineering and Applied Sciences (SEAS) has created flexible, metal-free electrode arrays that snugly conform to the body’s myriad shapes, from the deep creases of the brain to the fibrous nerves of the heart. This close embrace allows electrical impulses to be recorded and stimulated with lower required voltages, enables their use in hard-to-reach areas of the body, and minimizes the risk of damage to delicate organs.

“Our hydrogel-based electrodes beautifully take the shape of whatever tissue they’re placed on, and open the door to the easy creation of less invasive, personalized medical devices,” said first author Christina Tringides, a graduate student at the Wyss Institute and Harvard Biophysics Program. The achievement is reported in Nature Nanotechnology.

A medical device inspired by the human body

One of the hallmarks of all living tissues, particularly the brain and spinal cord, is that they are “viscoelastic” – that is, they will spring back to their original shape if pressure is applied to them and then released, but will deform permanently into a new shape if pressure is continuously applied. One common example is ear gauging, in which placing a larger and larger gauge into a pierced ear stretches out the hole in the earlobe over time.

Tringides and her team realized that alginate hydrogels, which have been developed at the Wyss Institute for a number of functions including surgical adhesives and single-cell encapsulation, are also viscoelastic, and reasoned that they should be able to tune them to match the viscoelasticity of tissues. Given her background in neural engineering, Tringides decided to try to create fully viscoelastic electrodes that could match that of the brain for safer and more effective neuroelectric monitoring. Standard electrodes are made of metal conductive arrays contained within a thin plastic film, and are up to a million times stiffer than the brain.