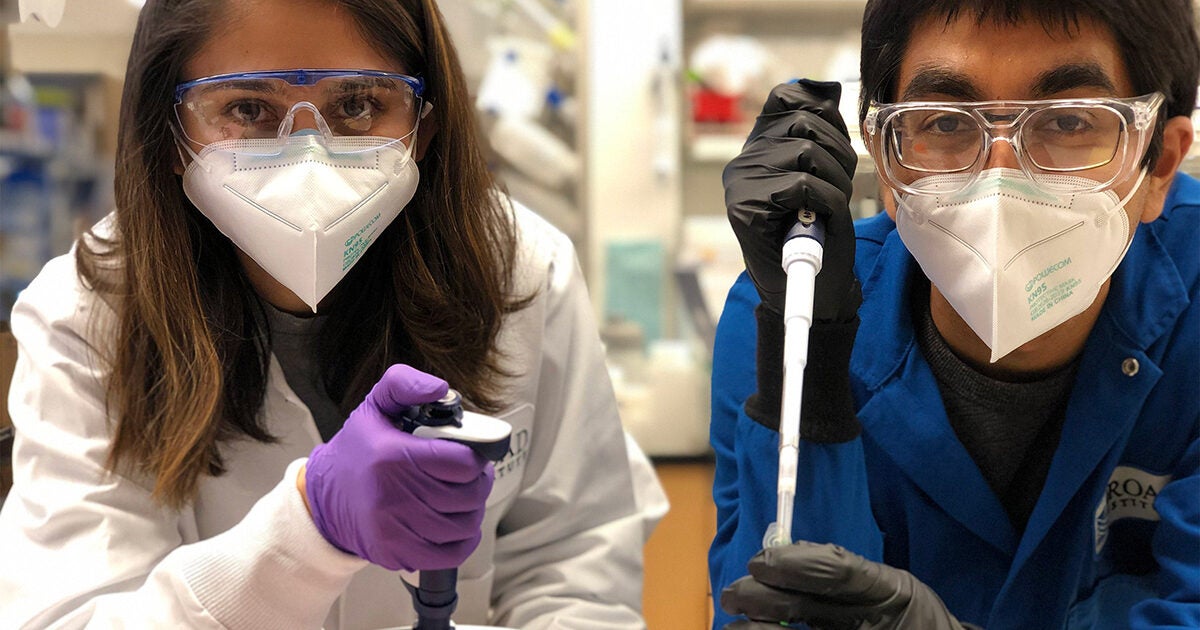 A team of researchers led by Harvard and Broad Institute scientists has developed a new drug-delivery system using engineered DNA-free virus-like particles (eVLPs) that is able to edit genes associated with high cholesterol and partially restore vision in mice.

Because eVLPs enable safer in vivo delivery of gene-editing agents than some clinical methods with comparable or higher efficiencies, this new platform holds promise of being able to deliver therapeutic macromolecules with less risk of off-target editing or DNA integration.

In the paper, published in Cell, the researchers detail how they developed virus-like particles to deliver base editors, proteins that make programmable single-letter changes in DNA, and CRISPR-Cas9 nuclease, a protein that cuts DNA at targeted sites in the genome. The authors identified factors that influence virus-like-particle delivery efficiency and demonstrated that engineering these particles can overcome multiple structural limits to their potency. The team’s eVLPs are the first virus-like particles to deliver therapeutic levels of base editors to a variety of cell types in adult animals.

“The delivery of therapeutic macromolecules into mammalian cells in animals, and eventually in patients, is one of the most important challenges in life sciences,” said the paper’s senior author, David Liu, the Thomas Dudley Cabot Professor of the Natural Sciences and a core faculty member of the Broad. “There is often a very steep drop-off between in vitro and in vivo delivery, so we made the decision early on that our new delivery technology would need to show good efficacy in animal models.”

This work was led by members of Liu’s lab, including postdoctoral fellow Samagya Banskota, and Aditya Raguram, a chemical biology student in the Graduate School of Arts and Sciences, in collaboration with research teams led by Krzysztof Palczewski at UC Irvine, and Kiran Musunuru at the University of Pennsylvania.

This new delivery system finds a novel use for virus-like particles and builds on the success of base editors, which the Liu Lab developed in 2016, to rewrite individual DNA bases such as the mutations that cause thousands of genetic diseases.

Virus-like particles have long been studied as drug-delivery vehicles. Because they can carry molecular cargo and lack viral genetic material, they are able to exploit the efficiency and tissue-targeting advantages of viral delivery without the drawbacks of using actual viruses, which can insert their genetic material into a cell’s genome and potentially cause cancer and other diseases. However, existing VLP-delivery strategies have had limited therapeutic efficacy in vivo.

“The delivery of therapeutic macromolecules into mammalian cells in animals, and eventually in patients, is one of the most important challenges in life sciences.”
— David Liu, Thomas Dudley Cabot Professor of the Natural Sciences

The team identified delivery limitations and systematically engineered the components of VLPs to overcome cargo packaging, release, and localization bottlenecks. In doing so, they developed fourth-generation eVLPs that packaged 16 times more cargo proteins than previous designs and enabled an eight- to 26-fold increase in editing efficiency in cells and animals.

The team tested their optimized eVLP system to deliver base editors to the liver in mice, where they efficiently edited a gene that can lower “bad” cholesterol levels. A single injection of eVLPs resulted in an average of 63 percent editing of the target gene and a 78 percent drop in its protein levels, which substantially reduce the risk of coronary heart disease.

“The cholesterol target is particularly interesting because it is not only relevant to patients with a rare genetic disease,” Raguram said. “We are hopeful this is one example of genome editing being able to benefit a large population because cholesterol levels impact the health of billions of people.”

The researchers also used a single eVLP injection to correct a disease-causing mutation in mice with a genetic retinal disorder, resulting in the partial restoration of vision.

Going forward, Banskota is optimistic that eVLPs will be utilized by scientists quite easily because of the system’s relative simplicity and versatility.

“Because our system is relatively simple and easily engineered, it allows other scientists to adopt and build upon this technology quickly,” Banskota said. “Beyond carrying gene editors, eVLPs have the ability to transport other macromolecules with lots of therapeutic potential.”

This work was supported by the National Institutes of Health, the Bill & Melinda Gates Foundation, and the Howard Hughes Medical Institute.